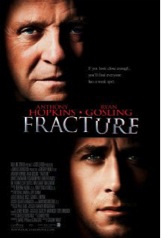 Fracture tells the story of a young prosecuting lawyer, Willy Beachum (Ryan Gosling) keen to be promoted, and move from crime into corporate law.  He agrees to one last murder trial before he makes this big move after being convinced that the case will be easy to win.  The accused, Ted Crawford (Anthony Hopkins) is an intelligent inventor, both malevolent and crafty. He is a master of mind games and challenges Beachum, both intellectually and emotionally.

The film is polished, easy to follow, keeps you guessing, provides amusing quips in the dialogue, and has some twists to keep you intrigued.

The  mind games between the Hopkins and Gosling characters are the focus of the film.  Be warned legal minds, you may need to turn a blind eye to a few legal inaccuracies and unrealistic points! But never fear, the film’s other qualities make up for these indiscretions.

Beachum is still a fairly new lawyer and clearly good at what he does but faces many challenges.  Early on we see the lawyer’s unease with the accused being self-represented and the role he sees himself playing as somewhat of an educator.  Then there is an ethical dilemma about tampered evidence, illustrating a conflict between justice, duty to the court and professionalism.  Beachum, as a young lawyer, is also frustrated by is his lack of contacts in or knowledge of other fields of law, and the time limits he is under.

The embarrassment of making mistakes as a young lawyer is illustrated when Beachum receives a dressing down from his District Attorney Joe Lobruto (David Strathairn).  The professional respect between these two characters develops through the film.  A love interest does appear for Beachum but does not take front and centre stage.  In fact it provides tension as Beachum has fallen for his superior (and mentor) at work.

Fracture is a good film and will entertain. I’ve given it 7/10.