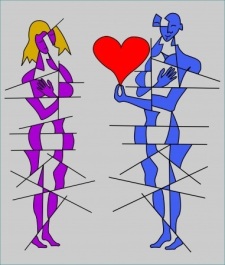 It probably won’t surprise readers to hear that relationship issues are generally the most common presenting issue that people bring to counselling.  Lawyers are no exception.  As you can no doubt imagine, the working conditions of lawyers can pose a risk to relationships such as long working hours, significant pressure, isolation from loved ones, inability to commit to regular involvement in home/leisure activities etc etc.  Over time individuals are increasingly at risk of becoming unavailable in any sort of connected way to themselves or others.  If you have experienced this kind of dazed state you might like to consider the following.

Have you ever wondered about the factors that lead to people having affairs? (i.e. a secret sexual relationship – including virtual – with someone while also in an apparently committed relationship with another).

Read on only if you would like to avoid being in that situation yourself.

Of course there are situations where a relationship is terribly wrong for both parties, and in these cases, finding other partners would be a wonderful thing.   However, as most people would agree (unless they are currently embroiled), it will always be less damaging to all parties if this occurs after the end of the relationship is acknowledged, including the understanding that each partner is now free to choose another.

Often things are not terribly wrong back at home

For many situations in which an affair occurs, one or other of the above circumstances is not present.  That is, the relationship is not terribly wrong for both parties – often not even terribly wrong for one party – and affairs commonly happen before the difficulties in the pre-existing relationship are openly acknowledged and therefore before any focused effort has been made on repairs. The proverb “a stitch in time saves nine” is certainly applicable to relationships, but unfortunately many couples fall into a habit of ignoring very serious rifts and just let the relationship fall apart.  There are endless combinations of factors that contribute to a situation where people allow something that was once so precious to slowly and often painfully shrivel up (no pun intended!) and waste away through lack of care.

One of the contributing factors that I have often witnessed, is a lack of understanding by individuals about themselves and what is truly important to them.  Rather than discuss issues when they first start to niggle people often ignore their feelings until the habit is so entrenched that they really don’t know what they are feeling.  This makes it unlikely that they will be capable of clear communication about how the relationship is for them.  In addition, as they have become in the habit of ignoring themselves, they are likely to have also formed some less than authentic habits with regard to how they are with their partner.   At this point they may begin to feel quite detached and lonely and this can cause confusion and even guilt – which in turn makes it less likely that they will communicate.  They will then be particularly vulnerable to becoming embroiled in an affair.  This is likely to occur as they project their yearning – which is often about the parts of themselves that they have neglected to own and develop – on to some everyday other   (who has a complimentary set of yearnings and undeveloped aspects of themselves) and then call each other ‘the one’.

Unfortunately, an affair with the ingredients described above is not likely to lead to a long-term emotional connection and at that point the cycle might just start again.

One of the things you can do now, to avoid the pain of the above, is to make regular efforts to understand who you are right now, including in any current relationship.  Do you have any ‘niggling’ feelings that you have not communicated? If you don’t have the time and energy for fully participating in a relationship then own that too. Take responsibility for yourself and your feelings.  Challenge yourself by asking ‘what do I honestly need to develop and how can I do that?’ The following exercise might help with some first steps:

However you are, that is ok, but you need to own up to it and then keep paying attention.   If, on the other hand, you choose to just plough on regardless, burying yourself in work and pressure and mindlessly neglecting everything and everyone including yourself (not the same as deciding not to be in relationship) – beware your potential future embroilment and all that will entail!