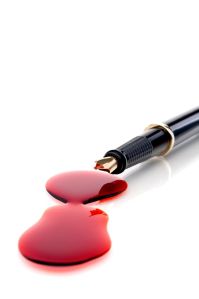 I have a challenge for you. My challenge is for you to journey back into your past and ask yourself: what are the events that led me to be the kind of person who would choose a career in law over any other? When you have selected a few, write them down. Create a story out of those experiences or even select one. It doesn’t have to be completely factually correct. In fact, they couldn’t be – memory simply doesn’t work that way. Ever. Instead, tell the story in the way that makes most sense to you. Because, that is actually what you are doing when you unravel the narrative of your life – you’re simply making sense out of it all. What I am asking you to do then is quite specific: I want you to undertake a process whereby you “make sense” out of your decision to become a lawyer. And I want you to do it now – before you begin practicing law or, if applicable, shortly thereafter.

Now I would not ask you to do something I was not prepared to do myself which is precisely how ‘Bloody Mondays’ I, II and III came to be. Well, almost precisely. Not quite. There was another story behind that task so before I tell you about how ‘Bloody Mondays’ ultimately came about, I need to describe a conversation I had a few years ago.

I was once asked by a mentor why I had chosen to be a lawyer. This mentor was no ordinary person. He is one of those people who just seems to understand things. He carries understanding in his eyes so that when he asks you a question you know that he both has a keen interest in the answer you’re about to give, but also somehow knows the answer you’re about to give before you do.

So here we were sitting across from one another in a café drinking coffee. He asks me why I chose to be a lawyer. Why law? Why not dentistry? I, naturally, pull out one of my stock standard phrases: “because I could”. Or, – since I actually have a couple – “because it was the sensible thing to do.” To which he replies: “Really? Is that the real story? Is that all there is?”

I let his incredulity hang in the air for a while. What else was I to do? It was a difficult moment for me because I value myself on being ‘straight down the line’, ‘direct’, a ‘what you see is what you get’ kind of person. But, in fact, I had just delivered a classic obfuscation. I’d said nothing really about why I had become a lawyer because – and this was the saddest part – I had not actually even worked it out myself.

I was almost forty.

Being almost forty and still not having an understanding of why I chose to practice law was, can I say, a little embarrassing. But not as embarrassing as the fact that I realised that I had taken no responsibility whatsoever for having made that choice throughout my entire career. The narrative I had always chosen to describe why I became a lawyer was designed to divest myself of responsibility and, as my mentor astutely pointed out, it wasn’t the real story. It wasn’t all there was at all.

So what was the real story? How does one tell the story of how they came to decide on one career over another? I pondered this for years before I chose to set myself the task of writing that story down. The ‘Bloody Mondays’ trilogy is really just an exercise (like the one I suggested to you above) in unpacking various events of my life and looking at them for clues as to why I might have chosen to pursue law. The three events I chose all involved a ‘murder’ (of sorts). They were all real events and the stories were based on my recollections of those events and, particularly, how I processed those events at the time.

In truth, I could have chosen several events throughout my life. I chose these three because they captured how I became a person who valued – above any other quality – the courage to speak out about injustice. As Martin Luther King Jnr so aptly put it: “Our lives begin to end the day we become silent about things that matter.” Can I suggest to you that lawyers lead the populace in the capacity, willingness and courage to speak out against a range of injustices in ways that can (and does) effect real change? (But then I’m biased.)

The three events I chose also described how I came to be a person who felt compassion for people even when they were acting at their worst. Even when they acted in utterly unspeakable ways. And they also describe the sense of responsibility I came to feel toward people who were suffering. And, to be honest, I saw suffering everywhere. My desire to alleviate people’s suffering was critical to my decision to practising law in the social justice field.

Not everyone becomes a lawyer for the same reasons. We are all unique people with our own drivers. But there is something very freeing about finally coming to an understanding of why you have chosen the career you have. Of retracing your steps throughout your life to uncover various events that you now see, in hindsight, were actually pivotal to making what is probably one of the most critical decisions of your life: what will my life’s work be?

To kick off 2014, newlawyerlanguage will be running a writing competition. In not more than 1000 words, tell us the story of why chose the practice of law to be your professional calling.

The winning entries will be judged by lawyer turned writer (no irony intended here) Tony Wilson. Tony is the published author of 9 books – 3 for adults and 6 picture story books for children.

All entries will be published on the website. Since every story is unique and potentially quite personal, we are open for the stories to be published via a pseudonym. Submit to newlawyerlanguage@gmail.com. Good luck!

In case you missed Arna’s Bloody Mondays series, you can read them here: