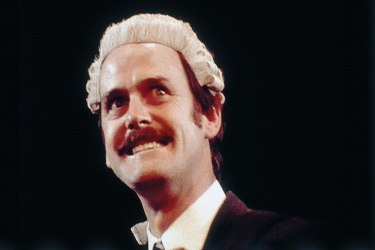 Monty Python member and Fawlty Towers funnyman John Cleese is well known for being one of Britain’s top comedians, but did you know that he started his career as a lawyer? Cleese read Law at Downing College, Cambridge, which has one of the biggest takings of undergraduate law scholars at the university. Like many of today’s budding barristers and outspoken law students, Cleese was drawn to the university’s Dramatic Society, bringing his own branch of surreal humour to Cambridge ‘Footlights’ revues. Here Cleese met fellow python Graham Chapman and together they embarked on an unconventional path to stardom.

Cleese may have left legal studies behind, but the law hasn’t left him. Cleese has admitted the upcoming Monty Python reunion was prompted by the need to raise alimony for his third of four wives. Since 2009 Cleese has been touring relentlessly in order to pay 612,000 pounds to his ex-wife annually until 2016. It was expensive divorce settlements that drove Cleese, his latest wife, and their reduced fortune to Monaco, to briefly enjoy the popular tax-free haven of the wealthy.