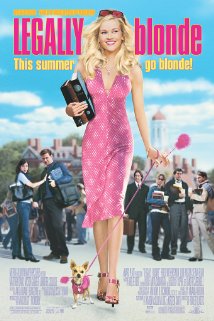 This could have been a very economical review. My brother very pithily provided the following analysis:

Dispelling the blonde=ditzy myth, by playing a ditzy blonde who triumphs anyway by getting into Harvard Law School using videos of herself in a wet bikini, motivated solely by the desire to marry her horrible boyfriend and have his children. I suppose that’s a typical feminist narrative these days.

Yes, really. Spring semester at the University of California sees the Delta Nu college sorority certain that their president, Elle Woods, will soon be engaged to her boyfriend, the apparently adorable Warner Huntington the Third.

Sadly, a wedding is not on the cards. Elle is summarily dumped by Warner and left broken hearted, moping in her dorm room scoffing chocolates. In an insulin-fuelled epiphany (and haven’t we all had them) she realises she can win back her man by the following simple plan.

1) Be admitted to Harvard Law School;

2) Show the ex that she’s a serious intellectual;

The first step is achieved on the strength of a brilliant 179 LSAT score, a GPA of 4.0 in fashion merchandising and a glittery bikini clad video essay (in lieu of the usual paper version).

This movie is an escape. More importantly, while it is hardly the epitome of a politically correct right on feminist film – it does actually raise a few thought-provoking issues.

Firstly it passes the Bechdel Test: – there are at least two named women in it, they talk to each other and about something besides a man. This is interesting because, the premise of the film at the outset is that Elle implausibly gets into and attends Harvard Law School purely to get back her man. However the story arc fairly rapidly morphs the goal into matters more weighty: – being taken seriously as a woman and issues of class and elitism.

Does it have something serious to say about the law and the legal field?

Yes it does. Despite the protagonist being a woman, a number of female law students and also one female law professor (played by the wonderful Holland Taylor) – the Law School, and even more so the law firm in which Elle finds herself an intern – is steeped in the ethos of male dominance and privilege. She is sexually harassed by Professor Callahan during her internship. She is hated by the ‘lesbian feminist’ for being too girly and by the other women because they presume she is using her sexuality to get to the top.

Of course the film shows Elle does a little of both. She happily gets into Harvard on the strength of the all-male selection committee’s interest in her bikini, yet she won’t sleep with the senior partner in her internship to get a job. Hard choices…

The bind Elle is in is very palpable and for many women, very familiar.

Class and privilege is ‘explored’ through a couple of amusing devises.

Elle is (somewhat hilariously) admitted to Harvard in the “diversity” equity group category.

Actually she is a child of Hollywood ‘new money’ who collides with East Coast ‘old money’ snobbery. Her Harvard peers see her as Malibu Barbie incarnate and her lecturers are simply painted as snobby bullies.

You will learn nothing about the actual law in this movie – however it does provide some interesting commentary on being a woman in the legal profession. Oh come on – whom am I fooling? If you are looking for legal gravitas – this is not your film. If you want a light movie that is alternately entertaining and irritating – this is your film.