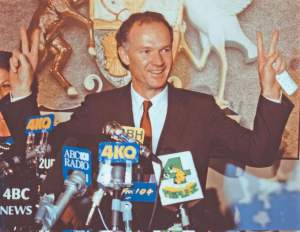 While those who grew up, studied, lived and worked in Queensland undoubtedly owe a huge debt to Wayne Goss – his achievements should be celebrated by all Australians who care about social justice and progressive reform. His accomplishments are especially remarkable when you consider the context of his work against the many years of the Bjelke-Petersen Government. He was responsible for setting up the Queensland Aboriginal Legal Service and his personal commitment to Aboriginal Australians was evidenced by his regular appearances in Court on their behalf. In 1989 he ended the 32-year rule of the National Party in Queensland, where his legal reforms included the end of the gerrymander, finally decriminalising homosexuality and introducing a number of measures to protect Queensland’s natural environment.