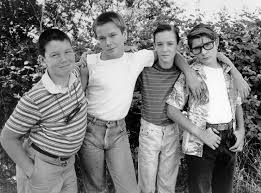 Few people 35 and over have not seen the 1986 movie, “Stand By Me”. Directed by Rob Reiner, the movie is based on the Stephen King novella, ‘The Body’. It’s iconic theme song is, of course, Ben E King’s song of the same name and it is probably no exaggeration to say that it is impossible these days for a great many people to listen to this song without thinking of the movie.

“Stand by Me” is a moving coming of age story that tracks four young boys as they hunt for the body of a boy reported as missing and dead. The protagonist, Gordie (played by Wil Wheaton as a child and Richard Dreyfus, as an adult) hangs out with a gang of boys who his father disapproves of greatly: Chris (River Phoenix) – the son of a violent alcoholic, Teddy (Corey Feldman)– also the son of a violent father – he tried to cut off his son’s ear – and Vern (Jerry O’Connell) slightly less dysfunctional than the other two, but not by much. One day the boys hit on the idea of searching for the missing body and returning it. They have dreams of a possible reward, perhaps some publicity.  Their plan works out well until they discover that Chris’ psychotic older brother (played by Keifer Sutherland) is also searching for the body. When all the boys – both young and older reach the body, there is an inevitable standoff, which the younger boys ultimately win. It is, however, a Pyrrhic victory – by the time they have found and taken possession of the body – they have grown enough to realise that some things are best left as they are – undisturbed and unadulterated.

What make this film really fascinating for the writer is not so much the coming of age story of the four boys but the “coming into being” story of one of the principal characters, Chris Chambers. At the outset of the film, the adult Gordi, is reading about his friend, Chris Chambers, in the paper. It outlines that Chris was recently stabbed to death trying to break up a fight between two people in a queue. The newspaper clipping prompts the adult Gordie to reflect on his time with Chris.

The first thing we learn is that Chris “came from a bad family and everyone knew he’d turn out bad, including Chris”. And yet, if we follow Chris’s role throughout the movie we notice immediately some pretty impressive traits – one’s that are commonly associated with lawyers. Chris always takes the lead. We are told that he is the leader of the gang. He is also the one that comes up with the idea to find the body. Chris is always standing up for others when they are being bullied or even when they are acting destructively themselves. He tries to protect Gordie from his own brother’s bullying. He is the one who saves Teddy’s life by physically pushing him out of the way of the oncoming train when Teddy is playing ‘chicken’ with a train. Gordie narrates that this is not the only time that Chris has saved Teddy. He stopped him from falling out of a tree house, an event that Chris still has dreams about. In his dream, instead of catching Teddy, he misses him. But Gordie can’t understand this: “Chris never misses.”

When there are disputes, it’s Chris that acts as mediator and he is the one who is always ready to reassure the others at times of distress. When Gordie asks him “Am I weird?” Chris replies: “Yeah, so what, everybody’s weird.” Chris then hones in on Gordie’s real concern is – does the fact that he wants to be a writer and not a footballer like his older deceased brother make him a loser? Chris is all support: “It’s like god gave you something. If your parents are too fucked up to tell you then maybe I should.”

It’s easy to see that with these traits, Chris would make the perfect lawyer, but we are told time and time again in the movie (usually by Chris himself) that the odds are completely against him – he will never amount to anything. So how does he go from being a smart kid with a lot of good qualities but from a bad home, to an attorney at law? One of the catalysts seems to be when Chris experiences a grave injustice himself.  Chris opens up to Gordie one night about a recent experience. It was nothing too unusual; he had stolen the milk money from school, which Gordie was aware of. But what Gordie didn’t know is that Chris returned the money to the teacher who, instead of congratulating him for doing the right thing, spent the money herself. Chris breaks down when he tells this story. His greatest pain is that there was no point setting the record straight because nobody would have believed him. This is a boy who has been told as long as he can remember that he is no good and will amount to nothing. After the boys have returned home, and at the end of the young Gordie’s reflection, Chris is still convinced that he’s got no hope: “I’m never going to get out of this town, am I Gordie?” Gordie’s answer: “You can do anything you want man.”

Which is exactly what Chris does do. The adult Gordi tells us at the end of the movie how Chris ultimately ended up going to college and becomes a lawyer. It is completely ironic to the adult Gordie that Chris, “who always made the best peace”, dies doing what he always did best.

“Stand by Me” is as much about the evolution of a lawyer as it is anything else. At the beginning and the end of the movie we are left with the image of a dead attorney – a man wrongfully killed trying to keep the peace. During the movie we are introduced to a young boy who is wronged in a variety of ways: by his family, teachers at the school, his whole community, but who somehow manages to find a way through. And yet, despite this commanding narrative, arguably the most powerful image that we are left with is not one that is suggestive of success; it is one that is suggestive of failure. We never actually see this image in the film but it will resonate with most lawyers. I am speaking of course, of the image of Teddy falling from the tree house – with Chris reaching down, desperately trying to catch him, but missing.

This movie is a must watch if you want to understand the inner world of a lawyer. Many lawyers are attracted to Law because they want to save and protect others, but they are haunted by the specter of failing in that endeavour. Each matter brings a new opportunity to fail. Each success is short-lived because it is overshadowed by the risk inherent in the next case. “Stand by Me” captures perfectly the lawyer’s classic credo: “I may not win this case, but I’m sure as hell gonna die trying.”