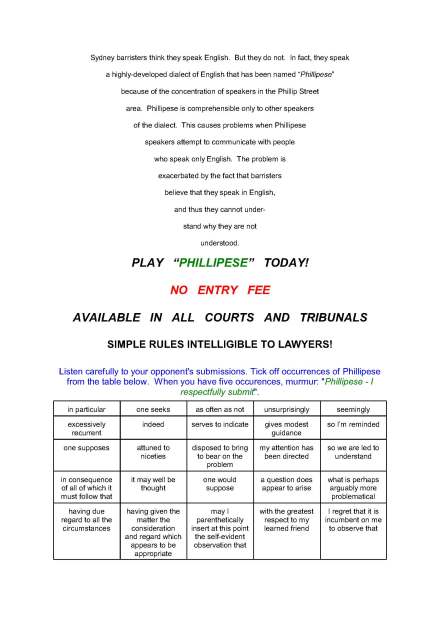 Barristers, who spend a lot of their time communicating with other lawyers or with judges, often lapse into jargon.  A few years ago, concerned that most of my colleagues were incomprehensible to normal people, I came up with the attached tongue-in-cheek poke at legal jargon.  Almost all entries were taken verbatim from things said by my colleagues.

There is a serious side to this. Several years ago, I was coming down in a lift in a building containing barristers’ chambers. The lift stopped before it reached street level and a young couple got in.  They looked at each other and the young woman turned to me and asked, “Excuse me sir, what does ‘reasonable prospects of success’ mean?”.

I was very taken aback but answered her as best I could.  The lift reached street level, she thanked me, and they got out.

I stood there in shock as I realised what had happened:  The young couple had been to see their barrister, no doubt with their solicitor present, and had received advice about legal proceedings they were involved in.  They did not understand the legal advice.  Neither lawyer had checked that the clients understood the advice they had been given, and the clients themselves apparently were too shy/scared/intimidated to ask for an explanation.  So, no doubt in desperation, they had asked a total stranger in a lift what the legal advice they had received from their lawyers meant.

Every barrister I tell this story to scoffs and says something like, “But everyone knows what ‘reasonable prospects’ means.”  They forget that, for non-lawyers, “prospect” makes them think of (if anything) looking for gold.  The phrase is pure legal jargon and it was indefensible that the lawyers had not checked that their clients understood the advice they had been given.