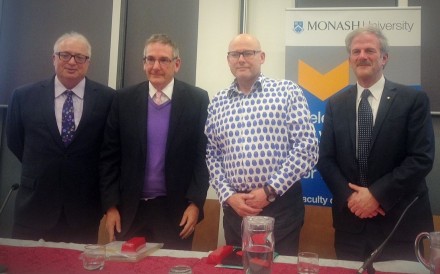 On the 12th May 2015, lawyers and educators met to celebrate the launch of the Monash Mental Health Front and Centre Wellbeing in the Law Initiative.

Panellists offered some “antidotes to the pressures” that lawyers and law students face alike at Monash Law School’s launch.

The panel brought together some of the law’s top professionals – the Honourable Justice Shane Marshall of the Federal Court and King & Wood Mallesons partner John Canning – into conversation with Professor David Copolov OAM, Monash’s Pro Vice-Chancellor and a practicing psychiatrist, and Professor Bryan Horrigan, Dean of Monash Law School and the panel’s host for the hour-long panel discussion.

Before the panel discussion got underway, Horrigan and Monash Law’s Student Experience Manager Lloyd England opened the evening with a launch of a YouTube video series (watch here) produced by the university to raise mental health awareness and mindfulness in the law. 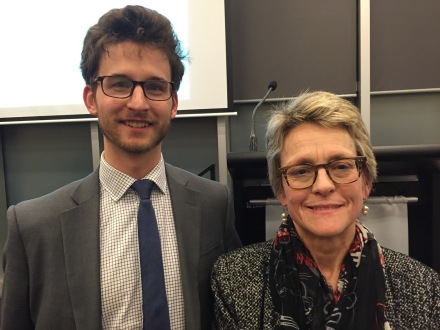 Monash Law School then recognised the efforts of the evening’s Guest of Honour, Marie Jepson, founder of the Tristan Jepson Memorial Foundation, which advocates for greater mental health awareness and support in the legal profession.

The Tristan Jepson Foundation recently introduced the “TJMF Psychological Wellbeing: Best Practices Guidelines” which the Foundation encourages law firms and other organisations to adopt and put into action.

Monash Law School formally announced its adoption of the Guidelines on Thursday night, joining more than 100 organisations to sign onto the Guidelines to date. Jepson praised Monash Law School’s effort as “modelling leadership for others in the law”, adding that “there is no end point to this campaign” to push mental health into the limelight in the legal profession.

With stress a well-known factor in the profession, a 2007 Beyond Blue survey found that 15 per cent of law students and lawyers suffer from “moderate to severe depression”. Other surveys report that around 20 per cent of barristers and 33 per cent of solicitors are depressed at some point in their career.

Lloyd England, who introduced the panel, said that the statistics show that “mental health problems don’t end with the law degree”.

Justice Marshall and Canning spoke to their personal, lengthy battles with mental health issues and how they learned to cope over time – and more importantly, how as they overcame difficulties, they could share their experiences in the hope of helping others suffering silently. “De-stigmatisation starts with the law students and lawyers of tomorrow”, Canning said, noting as well that, in his experience at Mallesons, “young people tend to talk more about mental health”.

Panellists also shared their thoughts on strategies within the profession to change attitudes and support individuals with mental health issues.

“It comes down to humanising the legal practice,” Copolov said. “The healthiest lawyers are those who report an intrinsic sense of moral satisfaction” and are collegial rather than overly adversarial. “It’s important to have a breadth of activities beyond the law and to seek support”, Copolov added.

When Canning had pushed for action on mental health within his workplace, he said colleagues were receptive and set up a subcommittee to discuss ways forward. In the words of one of those colleagues, Canning paraphrased, “it’s just the bloody right thing to do.”