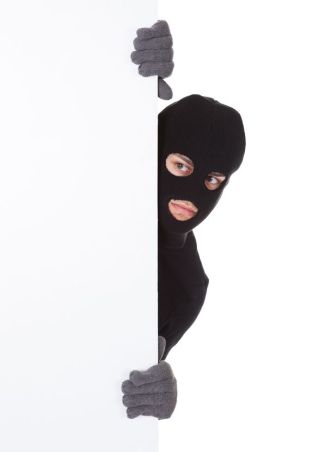 Just before Christmas I was arriving home from work and as I pulled up in front of my house I saw a young man, approximately aged fifteen, entering my house and pulling the security door quickly behind him. He was tall, thin, and clearly adolescent with scraggy blond unwashed hair, very thin gangly limbs and wearing a bright fluorescent pink singlet and board shorts. I only managed to get a glimpse of him before he entered the house but it was enough of a glimpse to know that he definitely was not one of my nephews and, since I don’t know any other teenage boys, it rather seemed to me that he had no right to be there.

I quickly sprung into action and called 000. I was immediately told a car was on its way and not to enter the house. Of course I was not going to enter the house! I didn’t even feel comfortable in my car so opted instead for crouching behind the car and peering through the driver’s window. I reasoned that I could bolt if he came out of the house whereas if I was in the car, I might fumble with keys; struggle to start the car, all sorts of things could go wrong. The police hadn’t yet arrived when I saw the same teenage boy walk out the side door into my garden. I saw the top of his head over the fence. “What’s he doing in the yard?” I asked myself. I decided that he was going to carry all of the electronic goods out into the yard, protected from onlookers by the fence, and then ultimately leave through the side gate. Of course! That’s what I would do if I were committing a burglary on a house like mine! I felt a little bit proud of him.

When the police arrived I told them that he was out in the garden and I gave them the keys. There was a male and a female officer. Both were well kitted out with guns and batons and capsicum spray. I was surprised to see them wearing bullet vests. (‘Is there going to be a shootout?’ I thought. ‘Good god, I’d rather just forego the electrical goods.’) But by this stage it was well out of my hands. The male police officer took up position at the left side of the property where the front door was and the female took up position by the side gate. She ducked down so that the offender couldn’t see her and peered through a gap in the gate before quickly ducking down again. She must have seen him straight away!

This was all getting a bit much for me. Crouched low behind my car, I considered, quite seriously, just leaving the cops to their business and hitting my local for a glass of prosecco. What I did not want – what I was quite sure I could not cope with – was to watch the police arrest an emaciated teenage boy, drag him out in cuffs and then throw him in the divvy van. As much as I wanted to avoid watching that spectacle, I decided to stay. After all, I would be a handy witness in the event of any potential ‘police brutality’. A strange thought, I am aware, given that the police were there to protect me.

At that point the policewoman departed (one would presume) with the usual protocol by calling out to me rather loudly and completely blowing my cover: “Are you sure it’s a male?” she yelled.

“Of course I’m sure it’s a male” I yelled back from behind my car, really annoyed that she’d given my location away.

Then slowly, in a moment which I am unlikely to forget in a long time, my side gate slowly creaked open and out walked my five foot nothing, blond, Swedish cleaner holding a broom. “Can I help you?” she demanded of the policewoman, incredulously. The policewoman turned to me with an expression that probably should have been sheer contempt but was more a kindly intentioned bemusement. Had I only kept seated in the car I could have swung into gear and just nonchalantly driven off, pretending to know nothing of the odd affair my cleaner had found herself in. However, I had to suffer the indignity of suddenly stepping out from the car and greeting Anita (not her real name) with a casual “Oh hey, how you going? So got a funny story to tell you!”

To their credit, the police were very kind about the whole thing. I apologised profusely but they just laughed and said, “no worries”. I got the sense that they were relieved they had avoided a confrontation. Even Anita could see the humour in it all. I, on the other hand, was utterly mortified.

How could I have seen a tall, gangly, pimply, adolescent boy with cropped hair when in reality my cleaner is pushing five foot, with a high pony tail of very clean blonde hair, and was wearing tracksuit pants at the time, not board-shorts at all? The only part of the description I had gotten right was the fluorescent pink singlet.

Of all people, I should know about the fallibility of eyewitness testimonies. I, of all people, should know that we are in the process of interpreting our memories at the precise time that they are being formed. Memory is an utterly creative act. It is never a picture of exactly what happened that we just replay in our mind at will. It is constantly evolving and this is particularly so the more we tell the story or our remembered event. Good god! I’ve dined out on this story so many times now I can’t even say: “this actually happened” with any sense of surety at all. In that way, we are all a bit like the Golux – we make things up you know.

The question then becomes, well why did I make up the story of the teenage boy committing a burglary on my house? I knew that my cleaner was coming over. Why didn’t I see that person at the door and tell myself that’s Anita? Instead, I became convinced, in the blink of an eye, that it was an unknown male. I even added bits of information that clearly was not there including the short, shaggy hair. I believe I saw in that person what I expected to see. And, as a woman who has been practicing in criminal law and associated areas for over fifteen years now, what I expected to see was a criminal. It’s kind of a bit sad isn’t it?

Bias comes into play every single time we observe an event and every time we remember it. Despite my exposure to how fallible and misleading eyewitness events are, I was no different than anyone else in the same situation. Potentially, I was even worse because I have bias x 1000 as a result of my occupation. The take away lesson for me is to look more clearly, take more time to question my perceptions and certainly, count to ten before I ever call 000 again. The shame of it!