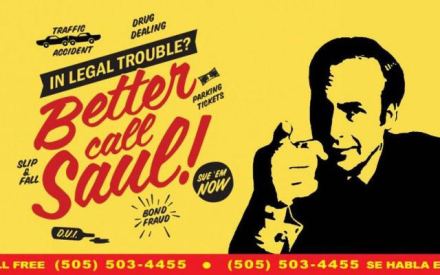 Spoilers abound. You have been warned.

We first met James MacGill, better known as Saul Goodman, in Breaking Bad, and his origin story has been explored (as far as the foundations go, at least) in the first season of Better Call Saul. If the ‘flash forwards’ are anything to go by, “Slippin’ Jimmy” ends up in witness protection, no doubt due to his involvement with Walter White, among other parties.

Not since Lionel Hutz of The Simpsons has the archetype of a sleazy yet loveable, fast talking, proverbial (or in Hutz’ case, literal) ambulance-chasing flimflam man with questionable qualifications to practice law been pulled off so brilliantly, and full credit to Bob Odenkirk on his portrayal of the character. It’s hard not to like him. The bus stop ads, the shockingly direct green screen advertisements which put major names in Australian public liability practice to shame with their brazenness, are all directly lifted from the U.S. legal industry. That’s not to say aggressive advertising (quite typically accompanied by commensurate aggressive billing) doesn’t happen in Australia, but I’ve seen how U.S. attorneys not averse to debasing themselves just a little go about spruiking their services in horribly put together TV ads.

Saul is entertaining. And it’s just about there that anything good about him can be said.

Criminal lawyers, despite what Saul Goodman would have you believe, are not conduits for one criminal to engage with others, or matchmakers as far as existing criminal enterprises or startups go. Walter White’s capacity to ‘disappear’ is facilitated by professional criminal with whom Saul maintains at least some kind of a non-client relationship. Saul acts as a middleman between Walter White, as a clandestine illicit drug manufacturer, and Gus Fring, a man with an industrial plant specifically geared to the commercial production of methylamphetamine. During the scene in the hotel in which Walter buys himself a gun with an obliterated serial number in a dingy hotel room, we learn the gun dealer and Walter were introduced via ‘the lawyer’. The same goes for Mike Ehrmantraut; another referral from Saul to Walter. Quite the one stop shop for a budding criminal. Forget the moral reprehensibility. How about the illegality of conspiring to commit a plethora of serious criminal offences in which Saul effectively involves himself?

Then there’s the money laundering. The vast, vast quantities of money laundering. The utter saturation of Saul’s involvement in the schemes used to launder money on behalf of the Whites is breathtaking, from buying businesses to sending money to third parties through fictitious inheritances. The sheer scale and quantity might be enough to convince a naïve audience that this is actually part, to at least some miniscule degree, of a good criminal lawyer’s job. In reality, no, it isn’t, and being disbarred is going to be the least of your problems if this is something in which you contemplate engaging.

We see the evolution of Saul from attempting to make his way into corporate law, working (poorly) as a public defender before getting involved with gangsters after a failed attempt at staging a traffic accident for compensation, and presumably going on to become the Saul we know from Breaking Bad. The conspiracy to stage a traffic accident for compensation money with a couple of kids who end up wishing they hadn’t gone along for the ride is bad enough. Along the way, he later procures the burglary of a client’s home, because ultimately, this was, to his mind, in the client’s best interest (and fit the story arc nicely). Let’s be clear here, in case it was missed initially – he procured an aggravated burglary undertaken actively with Mike in order to steal a substantial sum of money, in order to apparently get his client the best possible outcome. The ends thus justifying the means, we can all sleep better at the end of the show.

Yeah, nah. That’s not how it goes. Real life’s not like that, and the way both shows go about normalizing a litany of offences which would be bad enough being committed by any member of the public, much less an officer of the court, is almost worrying. The ends will not justify the means, no matter how you try to package it; you will be held to a higher standard than that nebulous “’reasonable person’ if you find yourself in court on a conspiracy charge of some flavour or another, and who knows – if you seek to emulate Saul, you too may find yourself working in a shopping mall in another state using a fake name, probably after a stint in prison and penniless, if you’re lucky enough to escape the agitated clients with whom you’ve become too closely involved when (not if) it all goes wrong.