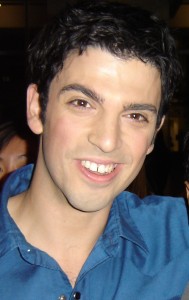 The satirical news writers and television stars of The Chaser are perhaps best known for erring on the wrong side of the law. A knowledge of legal rights might come in handy when planning stunts such as the notorious APEC security breach. Fortunately, Chaser members Dominic Knight, Julian Morrow, Chas Licciardello and Craig Reucassel were all graduates of the Sydney Law School. Journalism graduate and fellow member Chris Taylor even worked as a court reporter for two years before joining The Chaser team.

Consumer affairs television series The Checkout, starring Julian Morrow and Craig Reucassel, showcases something not unlike legal advocacy. Viewers are reminded of their rights as consumers and product claims and guarantees are tested. The show itself has not been immune to legal controversy. The ABC faces legal action over The Checkout segments on A2 milk and Swisse vitamins.

Chaser member Dominic Knight is the least recognised of the group, writing rather than presenting on most Chaser programs. In 2009, Knight published a novel, Disco Boy, about a disenchanted law graduate.